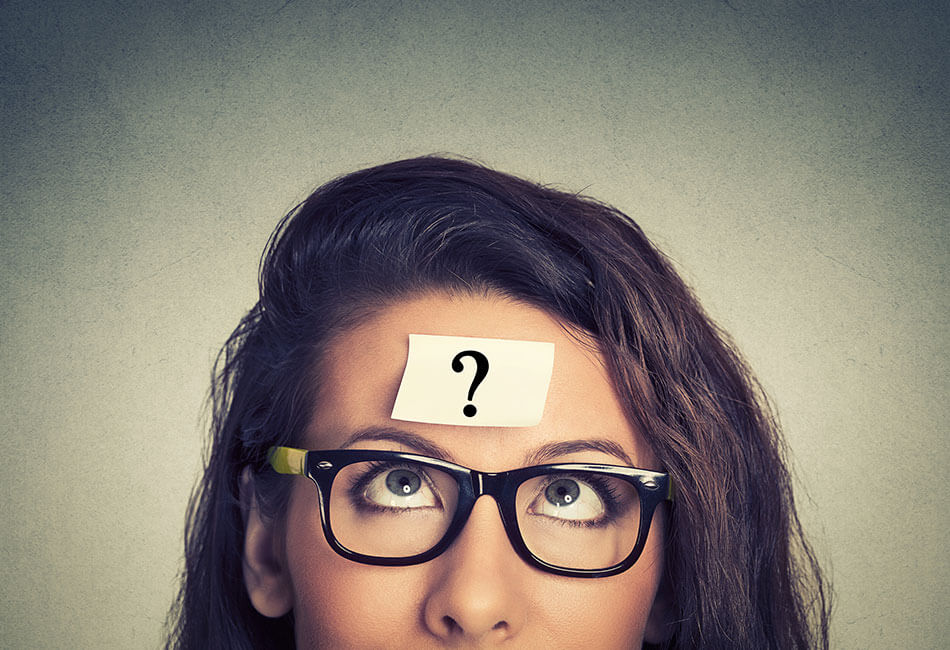 Americans have been swimming in a pool of negativity for all of 2016. It’s not hard to understand why. The overarching event of the year has been the presidential election, which will be over by the time you read this, and hopefully will result in a clear-cut winner. The power of politics to influence the public mood has been overwhelming in 2016, as each candidate reminded us incessantly how dismal our lives would be should their opponent win. The constant drumbeat of criticisms, insults, and just plain nastiness has raised Americans’ anxiety level to a fever pitch. Despite our weariness of the drawn out campaign, we have been glued to the media with a fervor bordering on obsession. This has caused normally rational people to bemoan in apocalyptic terms the demise of American democracy. But the reality is that lots of things are going right in this country.

The entire political process is a case in point. This has been as unpredictable and bare-knuckled a campaign as many have ever seen, and yet the whole process has an orderliness to it that candidates and voters both, in the end, respect. Would it be nice if the contenders engaged in thoughtful debate and an objective weighing of the pros and cons of policy approaches? Of course it would, but the fact is that this has never happened in American politics. It is instructive to go back to the campaigns of the past when politicians were dealing with world wars, the Great Depression, the McCarthy anti-communist era, the civil rights movement, or the fraying support for the Vietnam War to understand how closely today’s politics follow an age-old pattern. Hyperbole, unfair and inaccurate accusations, and eloquently phrased predictions of our societal doom (only if the opponent wins, of course) have been a staple of the American democratic process. It is not pretty, but it is our periodic opportunity to release our pent-up frustrations with the leaders and their cronies. If the frustration is intense enough, we are allowed to institute change, without bullets or bloodshed or military coups. Elections in the early years of this country were no less vitriolic, although our institutional memory would have us believe otherwise. We unfortunately cannot photoshop the election process into the noble, high-minded affairs we assume our founding fathers conducted, and so today’s electoral process surrounds us in all its beautiful ugliness. We should be thankful that it functions as well as it does, and that the “wisdom of the crowds” is given an opportunity every four years to work.

On the economic front, job growth has stood out as the brightest statistic for the year. The latest jobs number showed 161,000 jobs were created in October, with substantial upward revisions for September and August, and the unemployment rate hovered at 4.9% But that’s only part of the story. So far in 2016, the economy has generated an average of 181,000 new jobs a month, and hiring has increased for 73 consecutive months. That is the longest streak of net job growth since the US began keeping records in the 1930s. This is a far cry from the dark days of 2008, when we were tumbling into a mini-depression and the economy was hemorrhaging nearly 300,000 jobs per month. Another aspect of the latest jobs report was that it confirmed that the elusive inflation in wages is starting to appear. Hourly average wages registered a 2.8% gain year over year, and while it may not sound like much, it is the fastest growth since the 2008 recession. This has been one of the key criteria the Federal Reserve has been looking for in deciding whether to raise interest rates another baby step. 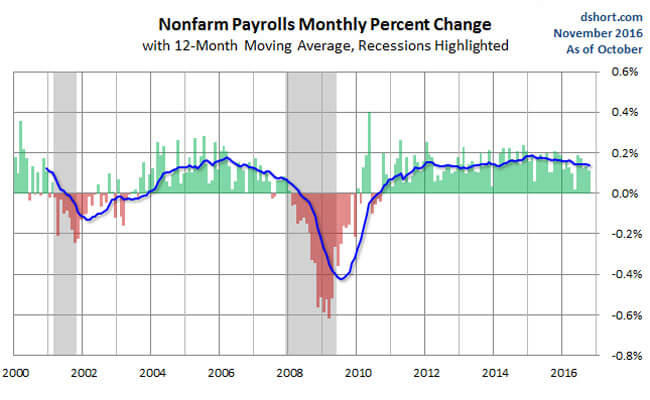 This has also begun to nudge the labor force participation rate off the floor. Much has been said about the “quality” of the jobs created in the US, arguing that they have been lower paying, entry level jobs. This is partially true, and there has been a large portion of the work force that chose to stay unemployed rather than work at menial jobs. But now the lure of higher wages is drawing people off the sidelines as businesses are making it clear that they will pay more for labor. Indeed, symptomatic of this trend are the numerous ballot measures across the country calling for a hike in the minimum wage. Rising wages have been a major missing component from the recovery puzzle, so this trend may be the spark that ignites a virtuous cycle of spending and consumption.

The latest report on GDP (gross domestic product) was also a pleasant surprise, coming in at a 2.9% rate, and a notable rise over the second quarter’s 1.4% tally. The better tone in third quarter GDP reflected an upturn in private inventory investment and an acceleration in exports. Moreover, the housing market has continued to be a major prop to the economy and has shown impressive resilience in the face of all the political negativity. Sales of existing homes are being bolstered by first time buyers. This sector’s reach is broad, with a resilient housing market likely boosting demand for furniture, paints, appliances, garden equipment, and a range of skilled and unskilled labor. All of this should underpin job growth and compensation, and boost factory output and inventory restocking.

Finally , consumers have also come off the sidelines, as shoppers picked up their spending in September. In all, retail sales jumped 0.6% during the month, on gains at furniture dealers, building materials stores, restaurants, and Internet sales. The upswing also is taking hold in the auto industry, a sector that continues to hold its own after years of steady gains. Last month’s healthy retail showing came after spending sputtered in July and August, prompting fears of another soft patch. But rising job totals and higher incomes are encouraging shoppers to spend more freely, and this should help sustain the economy’s overall growth, as the consumer accounts for some 70% of aggregate business activity.

All this good news has placed the US Federal Reserve in the tricky position of having to decide whether to let the good times roll, or raise interest rates again and possibly spoil the party. The case for the Fed to raise the fed funds rate appears straightforward. The unemployment rate has fallen below 5%, a level considered by the Fed to be full employment. Recent labor market data has been strong, with underlying data suggesting employee confidence. Yet recent comments from Fed governors, and Chairwoman Yellen herself, have indicated a willingness to let the economy run “hot” (their words) in order to build up the traditional momentum of inflation and capacity utilization that historically marked the peaks of economic expansions. The reason for considering this is to avoid prematurely extinguishing the consistent, though modest, growth that has developed.

Central-bank policies abroad are constraining the actions of the Fed. With incrementally aggressive policy during the past eight years, policymakers have now moved into what was thought to be impossible: negative interest rates. Even with more than 31% of developed sovereign bond yields negative, central banks are still looking to become more aggressive. The European Central Bank (ECB), Bank of Japan (BOJ), and most recently the Bank of England (BOE), have all expanded their asset purchase programs with expectations of more to come.

Today’s “conundrum” is how the Fed will uphold its dual mandate (price stability and economic stimulus) while recognizing the interdependence of global policies, economies, and financial conditions. The Fed appears to be going it alone in seeking to tighten policy. As global central banks push the scales with further quantitative easing, it amplifies even small changes in the fed funds rate on financial conditions and economic growth. 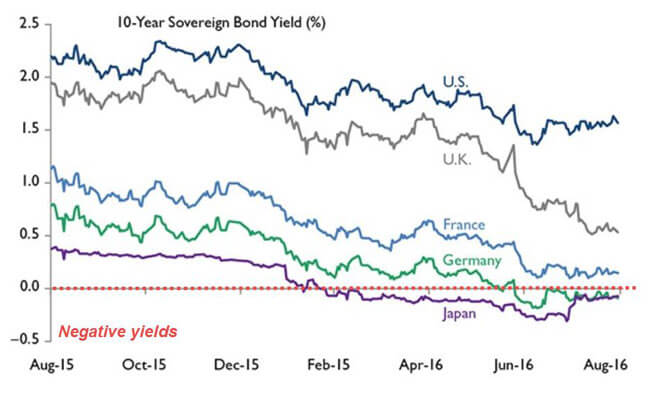 This “conundrum” has not escaped Wall Street, which has been haunted since summer by the twin worries of political uncertainty and the potential for rising rates as a result of a stronger economy. While supposedly negative developments, such as Britain’s vote to exit the European union or the collapse of oil prices, have barely dented the bullish case, politics and the Fed have weighed heavily on stocks recently. As for near-term positives, we have reached “oversold” levels recently that have historically marked bottom points for stocks. Since the economic backdrop has been favorable, this sell-off is attributable to fears over the election outcome. Mercifully, this will be resolved soon, and investors can get back to focusing on the traditional drivers of stock prices.

One longer-term negative has developed, however, and that is a sell signal in the NYSE advance/decline line. This has been a reliable indicator for the long-term trend of the market, and should not be taken lightly. At this point, we can’t know if pre-election nerves are the explanation for this sell signal, or whether it is a harbinger of trouble to come. Behavior after the election will tell the tale. We hope it is a sign of investors’political anxiety overwhelming their better judgment, and overlooking all that is going right in the economy. 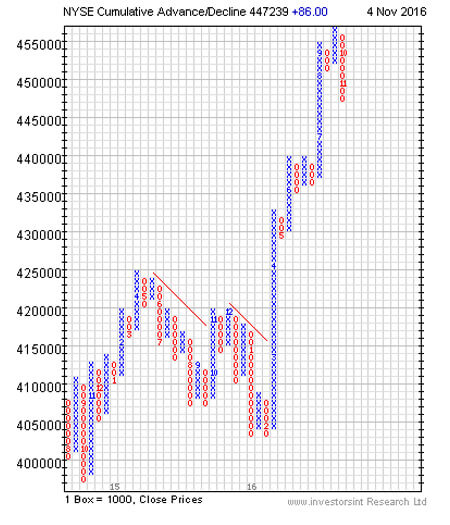