Donald Trump’s first 100 days as president were marked by a deluge of analysis over what he had accomplished in his young administration. Media and political pundits were as divided on this assessment as they were over his candidacy, with conservative supporters viewing the glass half full, and liberal detractors focusing on a glass half empty. The sheer volume of 100 Day articles, however, underscored the great expectations that have greeted the new tenant of the White House.

Expectations for an economic boost have been widespread. The momentum that had been building through 2016 continued into the new year, with jobs growth maintaining their pace of about 200,000 new creations monthly, and measures of consumer confidence and small business sentiment rising to new cyclical highs.

But the quarter ended on a sour note when the monthly jobs report for March came in at a meager 98,000 jobs created. Additionally, Gross Domestic Product (GDP) for the first quarter, reported on Trump’s 99th day in office, came in at an anemic 0.7% growth rate, about half of what was expected. Both measures surprised economists and Wall Street alike, who had expected strong psychological indicators to translate into a hiring and spending push.

The divergence between psychological or sentiment indicators, and what is happening on the ground, bears watching in the upcoming months.

Healthy economic reports in 2017’s early months reflected both the momentum from last year, and also relief at the resolution of the long and bitter presidential campaign. Moreover, prospects for lower taxes and less regulation caused a boomlet of activity in anticipation of quick action on the legislative front.

The disappointing economic figures for March were partly blamed on bad weather, which took the form of monsoons in the west and blizzards in the east. Without doubt, this impacted activity. Moreover, for the past few years, the first quarter has turned in weak numbers for reasons that analysts don’t fully understand. It has followed a pattern that seems to have righted itself in later quarters. To wit, the April jobs number was a robust 211,000 increase, in contrast to March’s weak report.

Thus, the first quarter has been precarious basis on which to forecast the remainder of the year.

One possible explanation of March’s weakness is simply that expectations got ahead of themselves. Perhaps, once it became clear that action wasn’t going to happen as quickly as hoped, businesses held back their spending to husband their resources for a time when there will be more clarity to the rules of the game for taxes, regulation, immigration, and international trade. Only time will tell whether the recent downbeat reports were an aberration or a cause for lowering today’s great expectations.

One way to view how expectations are translating into reality is a handy report published by the Atlanta Federal Reserve Bank called GDPNow. The measurement of GDP is, of course, a key indicator of economic progress, and is comprised of many individual components. Unfortunately, it has historically been published with a huge lag time between the measurement period and the actual report, leaving analysts looking “in the rear view mirror” as far as the macroeconomic picture is concerned. 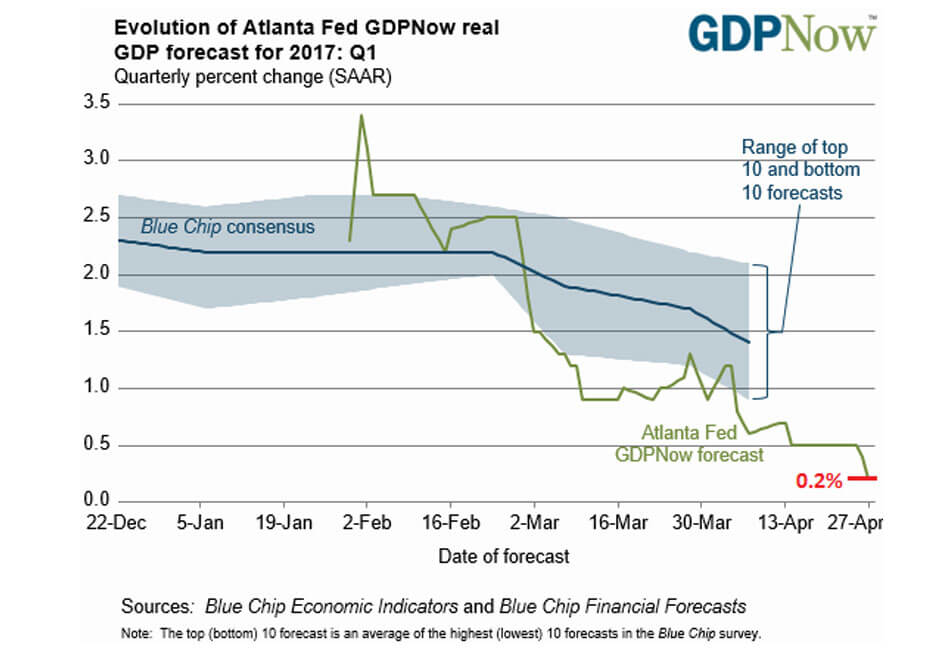 GDPNow solves that dilemma by providing real-time updates to GDP calculation. Knowing the various component that go into the GDP calculation, the GDPNow model is updated six or seven times a month as each update is released. As more data for the quarter are released the model becomes a more accurate predictor of GDP growth, “officially” measured by the bean counters at the Bureau of Economic Analysis (BEA). This has the positive effect of being able to see the mid-course ups and downs that the economy is taking, and the positive or negative effects that particular policies can have in the short run. For investors and policy makers alike, this can be a great benefit, as it offers a up-to-date view of what is happening in the economy, and may lead to better decision making.

Another characteristic of GDPNow is that it is not subject to judgmental changes, thus minimizing the distortion that human fiddling can cause. Hindsight is a wonderful thing, but is not very useful for anyone trying to make decisions in real time. With GDPNow, once the inputs are factored into the model, they are not changed unless the data in the next report changes. The combination of these characteristics has made the GDPNow model remarkably accurate, and much more reliable than the usually too-optimistic forecasts of Wall Street cheerleaders.

Best of all, the GDPNow report is free and available to the public. Simply search the term “GDPNow” or follow this link: www.frbatlanta.org/cqer/research/gdpnow.aspx

The report will be more meaningful to investors if they watch it over time, rather than a single view, as it dynamically adjusts throughout the quarter. For the record, GDPNow correctly measured the weak finish to the first quarter, with a “final” reading of only 0.2% GDP growth. The BEA’s first official estimate came in at the 0.7% quoted above. Revisions in official estimates will be coming in over the next several weeks, so we can then see how well GDPNow fared in its surprisingly tepid assessment of the quarter just closed. The good news is that the current GDPNow estimate for the second quarter is a lively 3.6%, based on early data. We encourage investors to check the GDPNow report regularly as it provides clear insight into one of the most fundamental drivers of the financial markets.

Stocks have continued to embrace the promise of the Trump growth agenda. Stock prices hold at or near record highs, and have proven remarkably resilient to any negative news from the political or economic front. The failure to get Obamacare repealed (the first go around) caused barely a ripple in the markets even though it was viewed as seriously denting Trump’s legislative momentum. The real prize for Wall Street, it seems, is tax reform. The prospect of significantly lower taxes for corporate America is too tantalizing to ignore, as it should boost profits and, hopefully consumer and business spending. The April announcement on tax reform was more of a broad outline than a detail-laden policy paper, and while building hope for investors as far as intent, left them wanting more details.

High expectations are clearly evident on Wall Street. Recent earnings reports have shown some of the best growth in several years, prompting analysts to project an even stronger finish to 2017. Moreover, the world economy seems to be in a synchronized growth pattern, with Europe and Japan finally appearing to rise out of the doldrums of the Great Recession, and delivering more vibrant growth than we have seen in some time. Thus, we are seeing a rising tide lifting the boats of many economies, justifying the optimistic rationale for owning growth stocks.

Indeed, the urge to own stocks is so strong that each dip in prices has been met with buying, resulting in an unusual dampening in volatility. The major stock indices have not witnessed so much as a 1% decline in many months, as the bulls remain in charge. Wall Street’s “fear index,” the VIX, is a measure of the premium investors are willing to pay for downside protection (via put options), and rises when the market falls. This measure recently dipped to low levels not seen since the 1990s, underscoring the confidence (or is it complacency?) investors have in the current uptrend.

But high expectations don’t come cost-free for investors. As we have continued to highlight in past issues of the Market Outlook, there are several major risk factors investors should not ignore.

The first of these is the valuation of stock prices, which continue to hover at very high levels. Valuation is not a very precise timing tool, as it changes slowly, but serves as a barometer of the level of returns one can expect for the future. History has proven that returns measured from points of high valuation tend to be low, while returns from low points tend to be above average.

Looking at our favorite valuation chart from Doug Short, we immediately notice two things. First, current valuations are high, residing some 84% (or just over two standard deviations) above the average of the last 100 years. Secondly, today’s levels are now the second highest in history, exceeded only by the all-time blow-out high valuation of the Internet bubble (1999-2000). This is not a sell signal, but a measure of the risk stock investors are embracing right now. As long as the global upturn continues, investors will be paid to take risks in the stock market. But if growth falters, valuation risk will come to the forefront. These charts are also free and available to the public at www.DShort.com and we suggest investors look at these, in conjunction with GDPNow, to understand the risk they are taking in the markets. 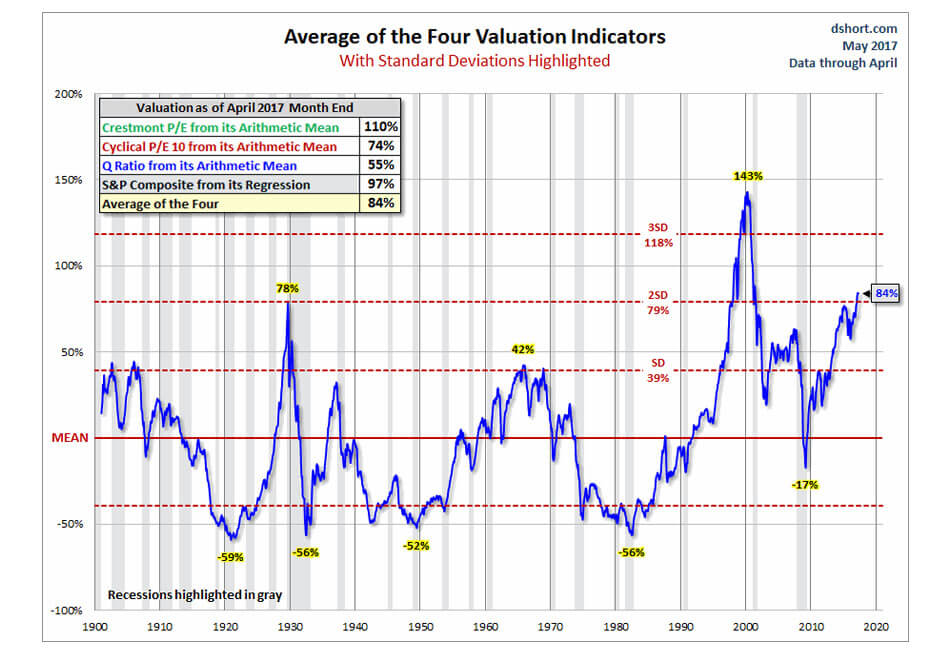 Second, margin debt represents the amount of leverage in the stock market. The stock rally over Trump’s first 100 days has pushed margin debt to new highs, and is a risk factor that is internal to the stock market. Increasing the demand for stocks by use of borrowing (i.e. margin) certainly helps magnify gains as stocks rise. But the flip side is also true, that losses are magnified by leverage on the way down, and that is our main worry about today’s high levels of margin debt. That is, that a persistent decline will start to cause “margin calls,” and perhaps starting a snowballing effect on selling, regardless of how well the economy is doing.

So far, stocks have yet to have a serious pullback on Donald Trump’s watch, and the positive hopes he has engendered have certainly given the market a firm upside bias. Hopefully, he can craft an agenda that promotes growth and job creation, and turn today’s great expectations into tomorrow’s reality.